I’VE BEEN planning a follow-up to All You Need to Know for a long time…..the idea is to release a new album every three years or so, but somehow it’s taken nearly six! 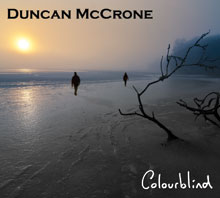 I’d like to be able to say that Cy and I are constantly coming up with new songs and bursting to get them recorded, but the truth is that the film and TV music work gets right in the way of songwriting much of the time, and it’s difficult to think about lyrics, middle eights, choruses and the like when you’ve a deadline to produce albums of Celtic themes or pipe bands for TV and radio productions.

They’re really good fun too, and in less work-dominated lives we might be able to do both, but we have been gradually introducing new original songs into the live set over the years, while working away at a few songs we’ve been really excited about.

At the same time, I’ve been tripping over all sorts of brilliant songs by other writers, and have so much enjoyed playing and singing them it became a priority to stop talking about recording a new album and just get on with it!

The first two albums are hugely important to me, of course, and in their way are milestones not just in my musical career (if you want to call it that!) but in my life itself.  Both were commissioned and fully funded by independent record labels, and I will be eternally grateful to Downtown Records and to The Music Kitchen for their faith in me and the terrific support I got from both.

This time, however, I decided to spend a lot more time on the recording process, and in the current climate for indie labels, this would be difficult financially, so Cy and I decided to finance the master recording ourselves, through our own production company Ranza Music.  All well and good, but to release a quality CD album, recording’s just the start of the process.  There’s artwork, CD pressing, distribution costs, press and radio promotion – all the expensive stuff.

Luckily, a good pal of mine, Adam Armit, who owns the highly-respected Edinburgh-based Circular Records, offered to release the new album on the label, and so things were set in motion. I can’t tell you how pleased and honoured I am to be part of the Circular roster.

It’s an eclectic and very discerning label, and to be part of a catalogue that includes virtuoso jazz guitarist Nigel Clark, legendary harper Savourna Stevenson, the amazing Scottish Guitar Quartet, hip-hop stars Stanley Odd and Americana band Hobotalk among others is a real privilege.

Recording of the new album began in early August 2011, and was completed four months later.  As with the previous two CDs, everyone connected with playing and recording was a friend of ours – musicians, sound and mastering engineers, arrangers, backing vocalists – and the list of contributors reads like a ‘Who’s Who’ of traditional and contemporary music (to use a well-worn cliche…).  Apart from Cy and I, there’s Stevie Lawrence, Chris Stout, Finlay Macdonald, Mike Bryan, Dougie Stevenson, Sandy Brechin, John Goldie, Ray Laidlaw, Allan Cuthbertson, Paul Edwards, with a guest appearance on backing vocals from my old band The Clydesiders – Sandy Kelso, John Graham and Dave Whitton – and my beautiful daughter Julie.

The ‘friends only’ rule extends to the artwork, with the sleeve design and studio photography by alt-blues star Dave Arcari (swapping the National guitar for a Nikon SLR for a short while) and cover photo by Steve Richards, who lives near me in my home village of Gartmore, while the sleeve notes are written by my pal (and fellow old car enthusiast) Rab Noakes, who also wrote one of the songs on the album.

Colourblind is a mix of Duncan & Cy songs, traditional Scottish works and some very carefully chosen covers by top songwriters of the past and present, and release is scheduled for May 2012. Vast amounts of time and love have gone into it, and I hope that comes across to the listener, whoever he or she may be.